Smears go by many names; in-betweens, multiples, happy accidents, outline distortions, sakuga, among countless others. However, one thing everyone can agree on is that smears are the little frames in animation that smooth things out, and speed things up. They’re the unsung heroes of cartoons; (usually) undetectable to the untrained eye, while still keeping the other frames in line.

The smears featured in today’s article have been given to us from the courtesy of the Nobaddy Institute of Fine Animation; only the finest of screencaps (handpicked from the institute’s collection by Nobaddy himself) are going to be shown.

However, what makes this a “blind review” is that there was no context given for any of these smears! After all, the truest form of reviewing is having absolutely no context whatsoever; that way, you remain completely unbiased as you watch/read/play whatever you’re reviewing!

These smears aren’t going to review themselves, though, so we should probably get started already… 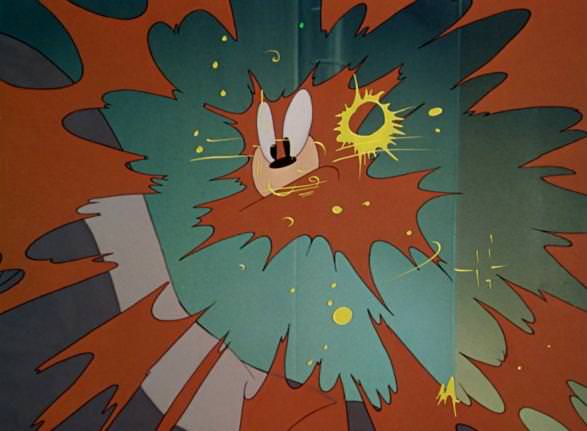 You know how sometimes in cartoons, characters explode? Well, in this smear, the poor toon has been blown to smithereens; poor guy… Don’t worry about him too much though; he’ll be back to normal in about 24 frames or so. 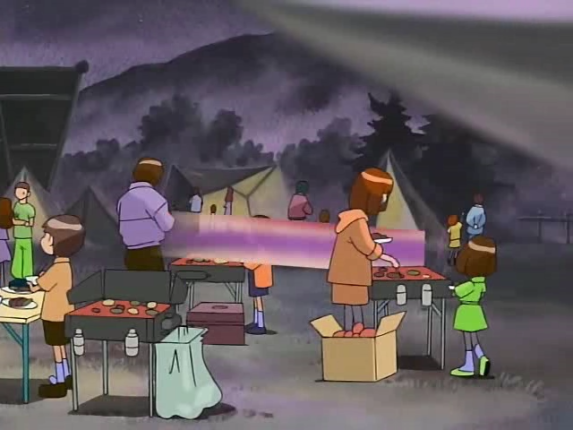 Wait, this isn’t a smear… It’s a long-distance anime cook-out! Just look at those long-distance anime patties cooking on all of those grills; they’re even grilling the buns! The buns! It’s almost like these generic anime background characters are supposed to stay still so we can focus on the food…

Not Applicable/10: Nice purple table, though. 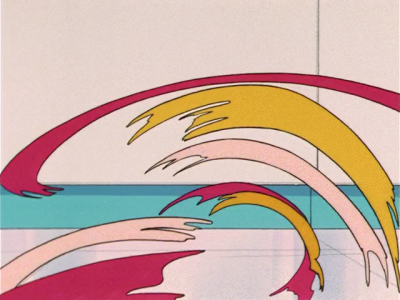 I can’t even tell who this is anymore; Is this supposed to be Sailor Moon? Bart Simpson? Lisa Simpson? Well, whomever it is, they’ve accomplished the highest form of smear; becoming completely unrecognizable. It’s completely amazing! They’ve become the SMEAR MASTER, the one with the smears and living embodiment the smear itself.

Sadly, we were given only three smears to work with; however, they were all very, very good smears. Would we blindly review smears again? Yeah, sure, let’s do it.

(And remember to subscribe to the Buttbuddz and send us more smears if you guys want to see another blind review!)

Hello Buttbuddz fans here’s another article streamed through the airwaves straight into your minds. Today we are going to review the classic anime Goof Troop which was made by The Disney in 199EH.

As all you Buttbuddz fans can see, Goof Troop is a very visually appealing anime. Let us discuss them before we go on to characters. As you can see this anime was drawn by people instead of a computer, so it is very flat looking instead of the full three dimensional look of Donkey Kong Country. Of course, there is room for different looks in art so I give the art at least a couple of Pepsi cans at the end of this review. Keep in mind that Goof Troop isn’t as spectacular eye candy as Donkey Kong Country.

Of course, Goof Troop is all about the characters. This anime is all about Bort Simpsen who is the greatest Mahou Shogun in all of the Goof Troop. In Order to save the world from the evil Peter, he has to uuuhm yeah I’ll let you know about that so don’t you worry about that. Just trust me in that Goof Troop is great anime. Also Goofy is in it.

Overall I give Goof Troop 5 Pepsi cans and 0 coke cans as it really is the perfect piece of media that no anime fan can live without. I recommend going to Crunchyflix at Amazon to watch this high quality anime now, it is avivable in 1080p which means it’s crisper looking than life, and that’s pretty dang good.

Hey Buttbuddz™ fans it’s me back with another great new anime article, which research shows are the favorite articles of you Buttbuddz™ so here it is.

Mahou Shojo is a very popular subgenere of anime*, especially among the Buttbuddz™ fanbase  (hi comica) which is why we will look into the very complex tale of the creator of all your favorite mahou shogun shows Izumi Todo of Toei Corporation.

Izumi Todo was born October 1, 1950 in a small cabin at the foot of Mt. Fuji to a family of very proud samurai, until they realized the time of the samurai was 300 years prior, so they decided to become shoemakers instead. After a normal upbringing, Izumi Todo was really desperate for a job (really desperate) so he got a job at ‘Toe Animation’ (This was before the merger with ‘I -Pictures’ which made it Toei Animation).

Izumi Todo had a very bad first 20 years of his internship as he had to mine asbestos for the animation cels. In those days, every animation studio of Japan was built inside asbestos mines so they could get asbestos for the animated cels. Then in the late 1990s he was promoted to “Creator of Cartoon”, or CoC.  Inspired by his samurai ancestors, Izumi Todo decided to make a new popular anime in the girls Mahou Shogun genere.

The first known anime created by Izumi Todo  was OjEmoji Doremi, which was the prequel to the hit movie The Emoji Movie. Even in this first cartoon you could see that Izumi Todo knew exactly what made for a good Mahou Shogun anime, which is, as described in this, Funny Faces and maybe some smears. It was also based on the true life story of Buttbuddz™ Member Pickles the Random Toon, believe it or not.

The series ran for 200 episodes, but had to be canceled when they realized the show was really really long. This brought up the problem that a show can only last 200 episodes before it gets pretty lame (see: The Simpsons). Izumi Todo now had to figure out how to make an Mahoo Shojougun which could run forever and also earn lots of cash in merchandising. So after some experimentation with shows about hamsters, Izumi Todo created Futari wa Pretty Cure which is a very popular anime among the buttbuddz fanbase (Don’t X out this window yet, Comica!). After each season, the series introduced new Precures to save the world and made by different cartoonists and writers, which means each season is actually a new mahoushow shogogun, meaning that it is never going to die it’s gonna make it if you try you’re going to love it. And also Precure is going to outlive you.

I would now write about how Izumi Todo lives a good life on retirement money in the french riviera, but sadly Izumi Todo died on the 12th of July 2016 after being brutally murdered by an angry fan of Dragonball Z, upset by Precure having all the good animators of the company. Life really is simply unfair.

Don’t forget fellow buttbuddz subscribers, that you can help out Stefan and his family by donating to his crowdfunding campaign https://www.gofundme.com/2tm9tqk

If you do this you will be remembered as a straight up alright guy and you will be blessed by fish and pepsi.

We will continue to wish Stefan the best of luck in his battle against cancer, despite the overwhelming odds he is facing.

To many, Robbie Rotten is a scheming villain, a master of disguise, an advocate of laziness, and just an overall brutus. However… Did you know Robbie Rotten is actually a straight-up honest guy? Contrary to his reputation as “Villain Number One”, he’s actually a freedom fighter for LazyTown, hoping to free it from its communist dictatorship.

Due to the lack of coverage regarding not only LazyTown’s government, but all of Robbie Rotten’s not-so-rotten heart as well, one of our Buttbuddz reporters decided to interview Robbie himself.

Buttbuddz Reporter: Thank you for taking time from your busy day to sit down and speak with us, Mr. Rotten. First off, do you have any connection to the brutish, British politician, Theresa Mays?

Robbie: What!? No! She disguised herself to look like me! For one, I’m against spying on ordinary citizens: Perhaps LazyTown’s dictators like Mayor Meanswell, maybe, but not innocent civilians!

Buttbuddz: You say that LazyTown’s a dictatorship, but can you elaborate on what it’s leaders -like Mayor Meanswell- have done to LazyTown?

Robbie: They all say that they “love that it’s the laziest place on Earth” yet “Mayor” Meanswell insists on everyone following the sleeping schedules, and physical activity standards set up by Sportaflop, the sworn enemy of laziness and all that LazyTown stands for! Then he turns around and says I’m the bad guy because I like sleeping in, and liking sweets… How can one man be in favor of all these contradictory things!? …And don’t think this is ending anytime soon; His niece, Stephanie, plans on taking over the family dictatorship after he retires.

Buttbuddz: I can see the problems you have with LazyTown’s government, but how does this impact the other residents of LazyTown?

Robbie: Believe it or not, they don’t want to be outside, or wake up at six in the morning, or eat nothing but fruits and vegetables; Do you think Pixel is really happy being forced to play real football outside instead of games like Extreme Football Throwdown? Do you think Ziggy’s happy not eating his favorite candies, but apples instead? Do you really think Trixie likes be forced to wear Roller-skates all the time!? I didn’t think so!

Buttbuddz: If you were in charge of LazyTown, how would you run it instead?

Robbie: I’d change the laws, of course. I’d abolish the required education laws Meanswell set up so that nobody would be forced to go to school, and everyone can learn at their own pace. I’d abolish the sleeping schedule, so everybody can sleep as long as their bodies need it. And, of course, I’d abolish all of Sportaflop’s “healthy living standards”; A nation without cake and Pepsi is a nation nobody should be living in!

Buttbuddz: But isn’t having only cake a bit unhealthy?

Robbie: Not exactly; There’s carrot cake, sweet potato cake, beef cake… Cake’s like sandwiches: You can put anything in a cake and still call it cake. Besides, its not just cake and Pepsi I’d allow; Ice cream, pies… You name it; we’ll have it. …Just not Coca Cola and apples, as those end up giving Sportacus the power to overthrow LazyTown’s reformed government. And we can’t have that, now can we?

Buttbuddz: Finally, what do you think of the residents of LazyTown?

Robbie: Deep down, I wish I could be friends with everyone… Sometimes it feels like I’m thinking about myself more than anyone else, but then I look at everyone’s living situations, and I realize they need my help too.

After our interview was over, Robbie immediately dashed out to resume his efforts in saving LazyTown from it’s tyrannical government. Hopefully, he succeeds in his efforts, but if he doesn’t, he’ll always be a straight up honest guy in our hearts.