Remember Game Review #1: Kirby: Squeak Squad, one of our first ever articles on the blog? Of course you don’t; The quality of articles didn’t get to “memorable” levels until about two days later. (So memorably, in fact, that we can still feel the waves of the Pretty Cure Content Flood of Summer 2017 to this day; At this point, we might as well give Cure Marine her own pillar/merge it with the Sailor Moon one…)

So what separates that simple, humble review of a Kirby game from our many great articles after it? Well, what if we told you it was an awkward, early article that suffered from being rushed? Sure, the game-play part of the review turned out okay, but the critical research failures within the review were about the game’s LORE.

Yeah, that’s right; Kirby: Squeak Squad‘s lore is a lot deeper than it looks, and -like the original article mentions- is not very noticeable in the game, for you see… Everything’s actually in Squeak Squad‘s manga adaptation!

First off, the manga goes over time and time again that Kirby is not evil. For example, -rather than being up everyone over cake- here’s Kirby spreading the wealth of Maxim Tomatoes and Invincible Candies with Dreamland’s residents, making every man a king comparable to the likes of Dedede in the process. 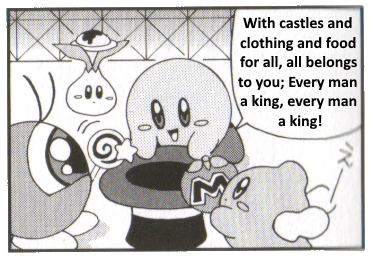 Speaking of King Dedede, Kirby also offers the great king parts of the plot’s strawberry shortcake if he helps look for it; Kirby sure is a straight up honest guy! 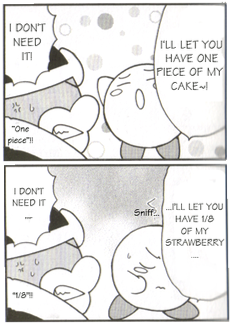 For a game commonly nicknamed “Kirby’s Fucking Pissed”, the manga is somehow a lot calmer; Even the “treasure chest that contains the cake/villain” part of the plot is more sugary-sweet than what one would’ve seen in the game!

Of course, we know what you’re really here for; RATS. Don’t worry, they make plenty of appearances throughout the manga adaptation of the game they star in. 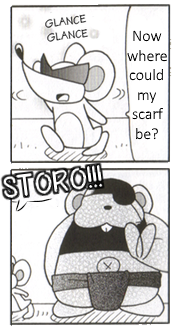 Even Kirby himself liked Squeak Squad’s very own rat clan enough to try and join them at one point in the manga!

There still might not be any Escargoon in the game’s manga, but to say that Kirby: Squeak Squad doesn’t have a lot of lore for a Kirby title is simply a mistake; Squeak Squad has as much of a story as any other title, you just have to know where to look for it!

This article was brought to you by Fivebuddz: Buttbuddz-quality freelancing for only $5 of the Buttbuddz budget! (Or, alternatively, over 500 jelly beans.)